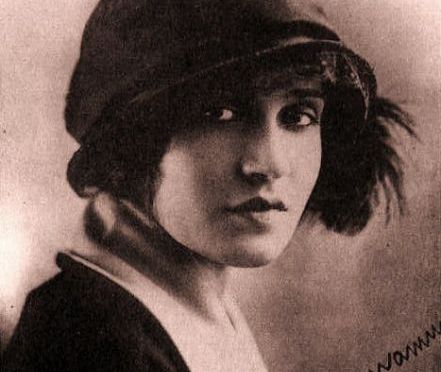 For our first contribution to Sheroes of History, Chiara Bernardi , a PhD student at Warwick University, and her sister Benedetta, who studies photo-journalism and women in Italy, tell us about Tina Modotti:

Assunta Adelaide Luigia Modotti, or Tina, as she became known, was born in Italy on the 17th August  1896.

In 1898 her family moved to Austria, but then came back to Italy in 1905, when Tina was nine years old. Tina, who couldn’t speak Italian, was a quick learner and soon succeeded in all classes and finished primary school. However, her promising results in school didn’t grant her access to further education; her family’s poor background forced Tina into a job in a spinning mill.

In 1913, at 18 years old, Tina left Italy to move with her father to San Francisco, finding a job in a spinning mill and attending –at the same time- art exhibitions, theatres and even starting an acting career in Little Italy. After ten years living in the US Tina moved to Mexico where she joined a group of artists known as the Mexican Muralists, whose large paintings often had political messages, and befriended the painters David Alfaro Siqueiros, Diego Rivera, Clemente Orozco, and Xavier Guerrero.

Unfortunately Tina Modotti’s important contribution to political activism often goes unknown. Tina Moddoti is rather known for her many love stories, with painter and poet Robo,  Edward Weston, with the Cuban revolutionary Julio Antonio Mella and with the anti-fascist activist and Comintern exponent Vittorio Vidali.

In the years while she lived in Mexico, Tina developed a great passion for photography; it could be argued that her political views and activism were expressed through her photography. Her camera became her “prosthetic extension” (Braidotti, 2013), a visual statement of her political indignation and strong interest towards the poor conditions in which Mexicans were forced to live. An exhibition of her photos in 1929 was advertised as “The First Revolutionary Photographic Exhibition In Mexico”.

She became a member of the Mexican Communist Party and was actively involved in the “Manos Fuera de Nicaragua” (‘Hands Off Nicaragua’) campaign; she also supported street demonstrations for Italian anarchists Sacco and Vanzetti. Her political activism, her bohemian life style and an accusation that she was involved in a plot to kill the Mexican President Pascual Ortiz Rubio led to her leave Mexico in 1930.

Forced outside the country, Tina moved to Berlin when the Weimar Republic was fading away and the city was going through street protests, strikes and the growing strength of the extreme right. When Germany’s move towards Nazism seemed imminent, Tina Modotti left and lived in Moscow, Warsaw, Madrid and Paris. She became actively involved in the support and assistance of other political refugees. In 1936 she moved to Spain to support the Spanish Civil War, where she became known as ‘Maria’. She relentlessly worked as a journalist and war reporter, becoming a prominent figure in the Intellectual Committee of Valencia; she never left the line and helped refugees. Photography seems to play almost no role in these years of political turmoil and civil war, or at least there is no record of it.  In 1940 the newly elected Mexican President Lazaros Cardenas revoked her banishment, and let her go back to Mexico. Upon her return, Tina continued her work with refugees and veterans and worked for the Giuseppe Garibaldi’s International Alliance. She died on January 6, 1942 in a taxi on her way home.

You can see some of Tina Modotti’s photographs here: