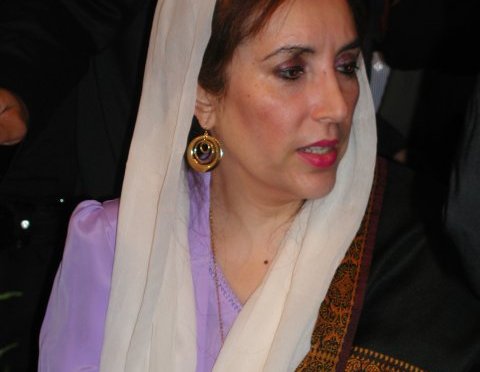 Benazir Bhutto became the first female leader of an Islamic state when she was elected Prime Minister of Pakistan in 1988.

This week’s post is inspired by a young woman I heard speak last weekend. I was privileged to hear Malala Yousafzai (a modern day Shero if ever there was one) speak at the launch of her new book in Birmingham on Sunday. When asked the question ‘Is there anyone who inspires you?’ she spoke about Benazir Bhutto. So I thought I would find out a bit more about the woman who inspires the girl who inspires so many others!

Benazir Bhutto was born on 21st June 1953, in Karachi, Pakistan. She was born into a political family; her father, Zulfikar Ali Bhutto, was the founder and leader of a political party called the Pakistan People’s Party (PPP). She grew up surrounded by politics and learned it’s importance in a society.

As a teenager she left Pakistan to study at Harvard University in America, before coming to the UK to study at Oxford where she became the first asian woman to be elected the president of the Oxford Union!

In 1977, back in Pakistan, there was a miltary coup. Her father had been the Prime Minister until then and was first captured, and eventually hanged by the people who had overthrown his government.

Benazir and her family also suffered badly under the new regime, which was led by a man called General Zia ul Haq. Over the next six years she spent time under house arrest, in ‘police camps’ and in prsion. The worse time of all was when she was held in solitary confinement in a cell in the desert; it was the middle of summer and she said the heat ‘turned my cell into an oven.’

In January 1984 both Benazir and her mother were suffering from bad health and they were finally granted permission from General Zia to leave the country for treatment. They fled to England and as soon as Benazir was well enough she began telling others about the things happening in her country. In 1985 she addressed members of the European Parliament.

In 1988 General Zia died in a plane crash (some think that there was a plot behind this, others don’t – we’ll probably never know.) Benazir was able to return to Pakistan for the first open elections in ten years. She was voted the leader of her father’s political party, so when they won the election that meant she became Prime Minister! This made her Pakistan’s first (and only to date) female PM.

Between her election in 1988 and 1996 Benazir served two terms as the Prime Minister of Pakistan, and one term in the middle from 1990-93 as leader of the opposition.

Her time in office was not without controversy, and many people have disagreed with her politics. Despite this she was still a hugely popular figure in Pakistan. The way Pakistan was governed meant that above the Prime Minister was a President – in this case someone who did not see eye to eye with Benazir at all. It was he who dismissed her from office in 1990, ending her first term as PM.

Her supposedly stubborn and authorative ways led her to be nicknamed the ‘Iron Lady’ of Pakistan.

She was accused of corruption more than once and ultimately it was this that led to her second, and final, term as PM ending. She and her children flew to Dubai and then England where she lived in exile for the best part of the next nine years. She continued to be politically active and campaigned for democracy in her homeland.

In 2007 she decided to return to Pakistan, immediately throwing herself back into the political limelight. She knew that she was potentially putting herself in danger, and within hours of arriving home she was attacked by a suicide bomber on a motorbike. Benazir survived, but over a hundred people were killed, with many more injured.

Bhutto began her re-election campaign, hoping to resume her position of Prime Minister. But several weeks before the election there was a second attempt on her life, when an attacker first shot at her, and then detonated a bomb. This time she did not survive her injuries. Benazir Bhutto died in hospital on 27th December 2007.

Whether or not people agree with all of her actions as Prime Minister, it is hard to deny that Benazir Bhutto is never-the-less an inspiration to many. For young women like Malala, who says she wants to become a politician, Benazir serves as an example of what is possible. Her determination and unceasing commitment to her cause, even in the face of danger, encourage people today to keep going.

This website is all about Benazir Bhutto and has lots of great resources about her life.

The PPP website has lots of audio recordings of Bhutto which you can listen to.

One thought on “Benazir Bhutto – Iron Lady of Pakistan”