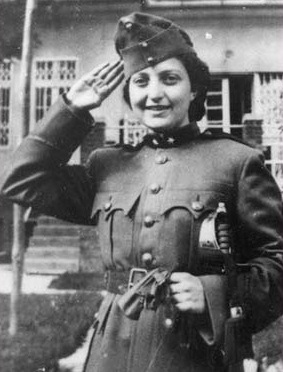 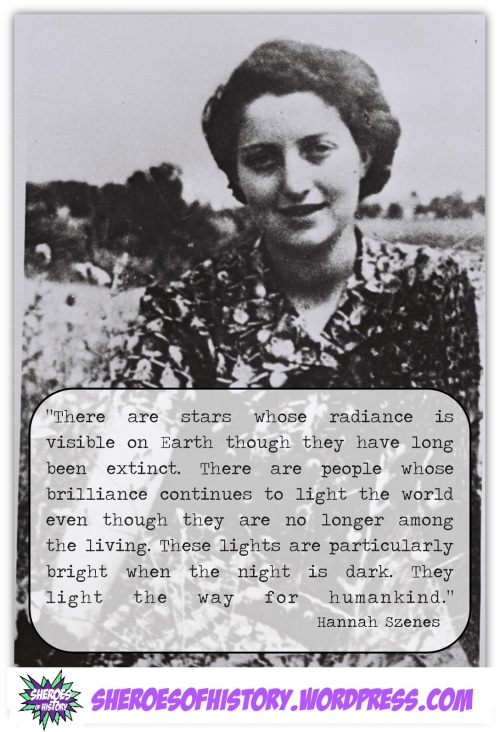 Eli, Eli
I pray that it never will end.
The sand and the sea
And the waves breaking and sighing
And high over the water
The wind blowing free.
The lightning and rain and the darkness descending
And ever and ever the nature of man.

(Translated from the original Hebrew)

The above prayer, which is recited at a majority of Holocaust memorial services, was written by a remarkable young woman whose short life was destined to have an impact on many people especially within Israel.

Born in Budapest on July 17th 1921 Hannah Szenes was a Jewish girl who showed herself as a gifted writer by the age of 13. At the age of 18, in 1939, she moved to British Mandatory Palestine where she wished to continue studying. This she achieved at an agricultural school then at a kibbutz. During this time she kept working on her writing through all the hardships she discovered.

In 1943, aged 22, Hannah made a dramatic, life changing decision. The news coming out of Europe about the plight of the Jewish communities under Hitler’s regime and pressure from The Jewish Agency convinced her to join the British Armed Forces to aid in the rescue of Hungarian Jews.

Firstly she was trained, like most female SOE operatives, as a wireless operator, then in Egypt as a Paratrooper. This training led up to a night in March 1944, when Hannah and several other Palestinian Jewish volunteers made a parachute jump, most likely from a British Heavy Bomber, into what was then Yugoslavia. Taking their time as so not to cause suspicion Hannah and two other agents finally crossed into Hungary on June 7th.  Hannah who had become separated from the others was captured within hours of being on Hungarian soil.

Sent to prison in Budapest Hannah was tortured, her captors hoping she would give up her fellow operatives and more importantly Allied Wireless Codes. This brave young woman, who was beaten so badly she lost teeth, never gave anything apart from her name to her captors. When the Hungarian authorities arrested Hannah’s mother and threatened to kill her Hannah still stood firm. This act of defiance probably saved her mother’s life. When alone in her cell Hannah would use a mirror flash to get messages to the other inmates, also singing prayers and trying to keep spirits up. Hannah was tortured right up to her tribunal in the November 1944.

Age 23 Hannah was tried for treason and for being a spy as the Nazi rules still counted her as a Hungarian national. Hannah represented herself, using masterful eloquence and warning the judges that the war was drawing to end in which their own fates would hang in the balance. Ignoring her warning the judges sentenced Hannah to death, but said the sentence could wait. Colonel Simon, who was the officer in charge, however had taken Hannah’s expressive speech as a very personal insult. On the morning of November 7th 1944, Colonel Simon gave Hannah an ultimatum: beg for a pardon or face death by firing squad. As she refused to see her captors as legally acceptable to try her case, refusal to beg was her option. She was permitted time to write letters to her family. When finally taken out into the yard she refused a blindfold. This meant she was looking to the eyes of her executioners as she died.

After the war ended Hannah’s Mother and brother published Hannah’s writings, and told of her heroism. A poem written by Hannah was found in her cell:

One – two – three… eight feet long
Two strides across, the rest is dark…
Life is a fleeting question mark
One – two – three… maybe another week.
Or the next month may still find me here,
But death, I feel is very near.
I could have been 23 next July
I gambled on what mattered most, the dice were cast. I lost.

Written for Sheroes of History by Mary Miles. Mary is a historian planning on doing a PhD centred on the women of SOE. She runs her own blog at www.mojiefiedhistory.co.uk runs 3 historically led Facebook pages and can be found on twitter as @tzarinadraconis

Two films have been made about Hannah’s life, Blessed is the Match: The Life and Death of Hannah Senesh and Hannah’s War.

Here is an in depth video lecture all about Hannah that you can watch for free online.

You can also find out more at The Hannah Senesh Legacy Foundation (her name was sometimes spelt this way too.)

One thought on “Hannah Szenes”