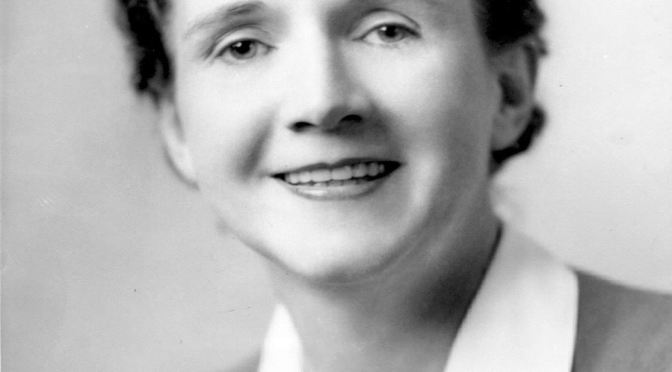 In 2007, a member of the United States Senate drafted a resolution to honor the 100th anniversary of the birth of a famous biologist; a woman who had been most at home with her nose in a book or on the shores of the sea. Things didn’t go as planned. Havoc ensued as a senator from Oklahoma mounted an outraged resistance against the woman’s memory. The controversial woman was Rachel Carson.

Carson grew up in Pennsylvania and was born with a gift for words—she talked early and had a story published in a St. Nicholas magazine when she was eleven .Her family struggled financially but Rachel was bright. With the emotional support of her mother, who even followed her to college to type her papers for her – something commonly done by moms before word processing – and with the help of a scholarship, Carson attended the Pennsylvania College for Women. She intended to be an English major and a writer. Her admiration for Professor Mary Scott Skinker swayed her to biology, an encompassing science that encouraged Rachel’s love of nature and introduced her to whole new worlds.

She received a master’s degree in biology from Johns Hopkins but couldn’t continue her studies because her mother became ill, and Rachel was needed to support the family. She found a job at the United States Fish and Wildlife Services. Here she came to understand the need to save wild places without harming an area economically. She saw the role of humans as not conquerors but as co-inhabitants of a delicately balanced planet.

Tiny and with a wistful expression, Carson spent her early life working for the government both as a biologist and as a writer. She never married but adopted her nephew Roger after he was orphaned.

Her first books, Under the Sea-Wind and The Sea Around Us, were penned in her spare time. She found writing “suffering tortures” but the tortures motivated her and she had a talent for making people care about nature. The books were successful and she quit her government job to devote her life to writing.

Rachel moved to Maine where her neighbor Dorothy Freeman would become the “white hyacinth” of her soul. The friendship between the two women would transcend definition. Dorothy would be her most faithful friend and correspondent and would scatter Rachel’s ashes in the sea she loved after her death in 1964.

Rachel Carson is best known for her 1962 release Silent Spring, which exposed the dangers of indiscriminate pesticide use and sparked the environmental movement in the United States. Massive birds death and the decline of the bald eagle were alarming people in the United States. Carson reasoned that all living things evolved from a common ancestor and thus it was irresponsible to imagine that the toxins would only harm insects. Rachel sounded the alarm that ,the once widely used, DDT accumulates in the food chain and affects calcium metabolism of birds, poisoning them and causing their eggs to have shells that are too thin. She was right but faced backlash from the pesticide industry and some academics who said that she couldn’t be reliable because she was an unmarried woman. Despite the controversy, she was supported by President Kennedy and prominent scientists. DDT used was curtailed in the United States. As Carson predicted, insects have evolved resistance to frequently used pesticides.

Carson was honored with numerous awards including the Audubon Medal. In 2012 the American Chemical Society declared Silent Spring a National Historic Chemical Landmark. In their words ”Carson’s book promoted a paradigm shift in how chemists practice their discipline and helped to establish a new role for chemists in investigating the impact of human activity on the environment.” Today the bald eagle populations in the United States are finally approaching their pre-pesticide levels.

Written for Sheroes of History by Catherine Haustein. Carson influenced many young women to become scientists including Catherine Haustein. Haustein is a chemist and fiction author and has written a “green” chemistry lab manual. Her website is catherinehaustein.com

The Rachel Carson website contains lots of information about Rachel’s life and work, including this useful timeline of her life.

Rachel is the subject of numerous biographies. Catherine recommends On a Farther Shore by William Souder.

You can read Rachel Carson’s work yourself. Here is a collection of her books which are available.

4 thoughts on “Rachel Carson and the Paradigm Shift”