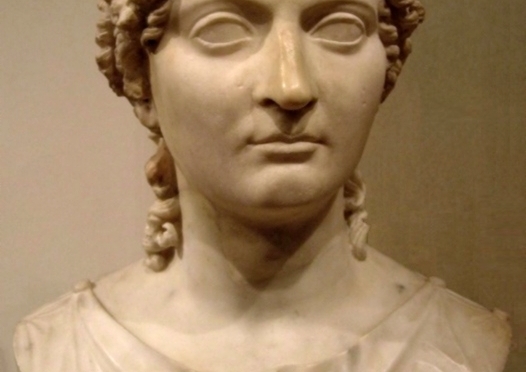 Agrippina the Younger was the first Roman empress, but you will almost never hear anyone call her that. She is best remembered as the mother of the emperor Nero, but she was also the wife (and niece) of his predecessor Claudius, and the sister of Caligula, Claudius’s predecessor. She was much more than a companion for male rulers, however. Although women were forbidden from having any official power in the Roman world, Agrippina ruled the Roman empire in everything but name.Agrippina was born into the Roman ruling family of the first century AD, the Julio-Claudians, and so she seemed destined to be at the centre of Roman power from her birth. But her path to the throne was not simple; she had a great many ups and downs in her life, including two years in exile, but by the age of 33 she had married her uncle, the reigning emperor. She did this by using her family relationship with Claudius after he had his first wife executed. Agrippina was there to comfort him, using her access to him as his niece to sit on his knee and offer him a shoulder to cry on. It wasn’t long before Claudius changed Roman incest law to allow him to marry his brother’s daughter, making Agrippina his wife and his empress.

It is Agrippina’s behaviour as Claudius’s wife that makes her quite so extraordinary. Unlike the wives of emperors before and after her, she was, in all ways, her husband’s partner in rule. Livia had previously been the model of a Roman imperial women as Augustus’s wife and Tiberius’s mother. But Livia had female power: influence over her male relatives who exerted the real, tangible power. She used her power in private spaces and never tried to enter public life herself. Influence wasn’t enough for Agrippina: she wanted to rule.

One of Agrippina’s first acts, for example,  was to found a town at the place of her birth in Germany and name it after herself: Colonia Claudia Ara Agrippinensium. Today it still stands, the city of Cologne. She donned the colours gold and purple—colours only available to the emperor—and sat beside her husband in front of the Roman imperial standards: the first woman in history to do so. She caused outrage among the great and good in Rome by putting herself in public spaces and forcing men to acknowledge that a women ruled over them.

But partnership was still not enough for Agrippina. She wanted to rule and saw little reason why she should not. Nonetheless, she was pragmatic and understood that the Romans would never stand for a lone empress—women were treated as perpetual children in Roman law—she would need a male emperor in name. And so, she persuaded Claudius to adopt her son from her first marriage, giving him the new name Nero and making him Claudius’s heir, and a little after that Claudius died. It was widely believed that Agrippina had poisoned him. With the death of Claudius, 17 year old Nero became emperor and Agrippina was his regent.

For four years, Agrippina ruled with her son, exerting her power openly with Nero as her smokescreen to appease Roman men who could not stomach a female ruler. The spaces of Roman power were never open to women: the senate house, the law courts and the army camps were forbidden. But Agrippina was able to negotiate her legal inability to access these spaces by sending her adoring son in her stead, allowing her to rule as much as it was possible for a woman to rule.

Such an arrangement could never last. As Nero entered his twenties, he began to rebel and the power struggle between them was weighted heavily in his favour. Agrippina was marginalised and isolated but refused to back down at any point. Eventually, Nero decided to have her killed. He had her stabbed, cremated and buried in an unmarked grave.

Agrippina was more aware than many women of the limitations placed on her by her sex by the system she lived in, and she refused to be limited by them. She used her sexuality and her roles as wife and mother to gain for herself more power than any woman in the history of Rome, inciting the rage and disgust of the men around her and she deserves to be remembered as more than just the mother of Nero.

Written for Sheroes of History by Emma Southon. Emma has a PhD in Roman history and is currently a writer and editor living in Belfast. If you are interested in learning more about Agrippina the Younger and her family, you can pledge for her first book Agrippina: Empress, Exile, Hustler, Whore at Unbound. Emma tweets @NuclearTeeth and has a weekly Roman history and culture newsletter called U Wot MVIII

Learn more about women in Ancient Rome on this BBC page

One thought on “Agrippina the Young”