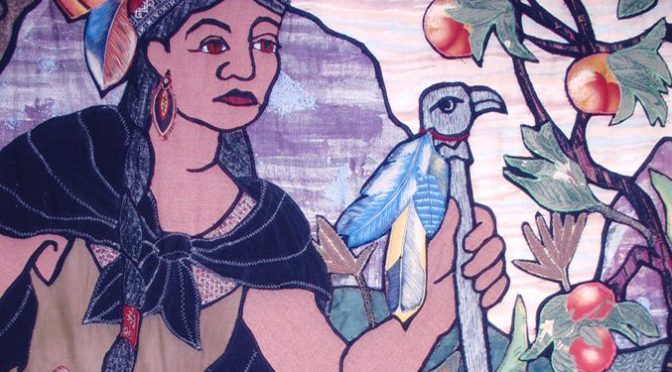 Who was Catharine Montour? No one really knows. We know that she was an Iroquois woman with a white great-grandfather. We know that she lived in what is now Upstate New York sometime between 1710 and 1804. After that, the stories get confusing, but her legacy lives on.

Her grandmother was also named Catharine Montour, and history often conflates the two. Not to mention all the Noble Savage, or just plain savage, tales that grew up around the younger Catharine.She married a Seneca, Telemut, who also went by the name Thomas Hudson. He died in 1760; one source says that he was killed in a raid on a Catawba tribe. Catharine may have become the leader of Telemut’s village, which was located at the south end of Seneca Lake.

In any case, English and American explorers called her Queen Catharine. She may have known English, because her grandmother was a noted interpreter.

Some background. The Iroquois Confederacy, or Haudenosaunee, consisted of six tribes: Seneca, Mohawk, Oneida, Onondaga, Cayuga, and, in 1722, the Tuscarora (displaced by white settlers in North Carolina.) The Iroquois lived in Upstate New York and northwestern Pennsylvania. They are credited with being the first democracy. Some historians say that the new United States democracy learned from the Iroquois.

Iroquois tribes are matrilineal, which is why Catharine had a French/English name. However, while Iroquois women’s councils chose the male leaders, only men could make war, declare peace, and conclude treaties. So, the notion of a Queen Catharine governing a Seneca village may come from the white people who chronicled her life.

As the French, English, and then Americans fought over territory, the Iroquois tribes became involved. During the American Revolution, the Seneca, under Red Jacket and Joseph Brandt, allied themselves with the British. Catharine’s village, which is now the town of Montour Falls, New York, was rich in orchards, gardens, cattle and pigs. The Seneca leaders may have seen as a way to feed their armies.

General George Washington decided that these pesky savages, who had aligned themselves with the British, should be exterminated. That’s what he said, exterminated. Washington continued: “The immediate objects of your expedition are the total destruction and devastation of their settlements, and the capture of as many prisoners of every age and sex as possible. It will be essential to ruin their crops now in the ground and prevent their planting more.”

That’s what General Sullivan did. On June 18, 1779, his army marched from Easton Pennsylvania, up through New York’s Finger Lakes region, burning villages and crops. He returned to Washington’s base in New Jersey on October 3. Many villages, including Catharine’s, fled before Sullivan arrived, taking refuge with the British at Fort Niagara in Canada. But the winter was harsh, and the British were less than hospitable. Many Iroquois died, and the Iroquois Confederacy was broken.

Some say that Catharine returned to the site of her village, where settlers knew her as an old wise Indian woman. Eventually, a new town, Havana grew up at the end of Seneca Lake.

For almost a hundred years, people around Havana heard tales about Catharine. During the Spanish-American War of 1898, the village decided that the name of Havana should be changed to Montour.

Today there is a memorial, honoring the Seneca tribe and Queen Catharine, in Cook Cemetery Memorial Park in Montour. There’s a Catharine Creek, and a Catharine Trail. It’s a beautiful place. 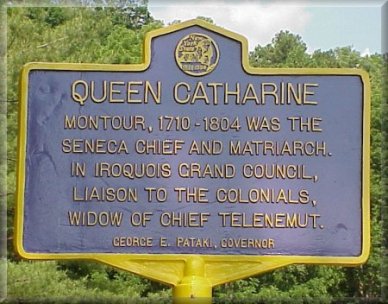 This beautiful image of Queen Catherine was created by Alice Gant who makes ‘Hero Banners’. You can see more of her work on her website here. Thank you to Alice for giving us permission to use this image on the Sheroes of History blog. 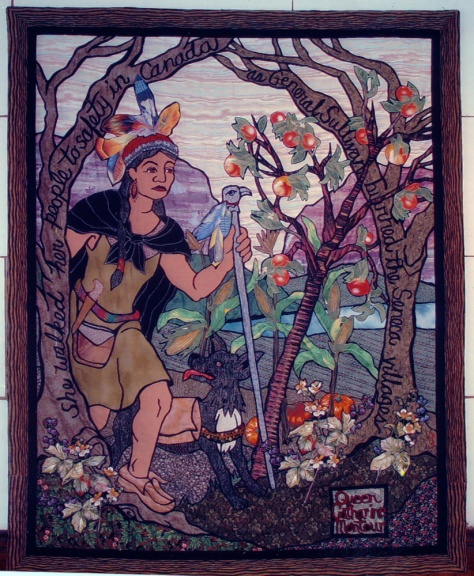 Written for Sheroes of History by Judith Pratt.