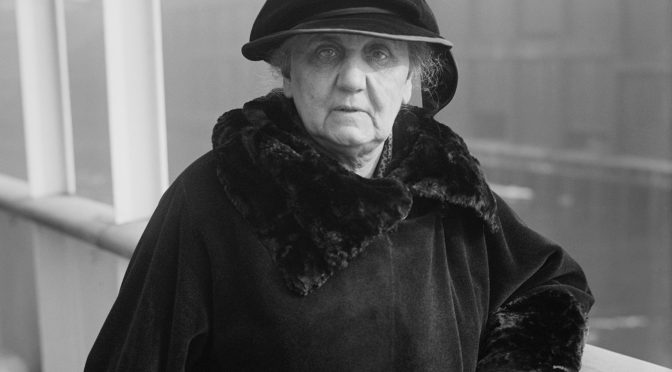 Jane Addams was born in 1860–the daughter of a wealthy Illinois businessman. At the age of two, her mother died after falling on ice while pregnant. This left Jane empathetic to how fate could work against a person.

Jane was called to help others. After visiting Toynbee House in England, she decided to develop a settlement house where rich and poor could live together and have shared experiences. With her fortune, she developed Hull House, a model of a community center in an impoverished Chicago neighborhood. The idea was to change and inspire those in poverty and those more fortunate. Hull House grew into a complex that provided whatever it was the poor needed—public baths, daycare center, kindergarten, after school art programs, and a coffeehouse-theater. It hosted clubs, music school, a library, and an employment bureau. Two thousand people, many recent immigrants, came to Hull House each day.

It was Jane’s views and her gift of oratory that altered society’s impression of poverty. Previously, she believed that wealthy capitalists were benevolent as her father had been. However, she found that many purposefully underpaid, refused to bargain with, and mislead their workers—causing them to see each other as lazy and deserving of their poverty. Child labor in unsafe working conditions was framed as a way to teach poor children about the value of hard work. Addams herself had believed this, seeing misfortune as the failure of an individual, but as she came to know people in poverty, she came to relate to their paralyzing and dangerous circumstances. She saw her position as a wealthy woman in society as giving her the ultimate privilege—to be able to make a moral choice and once she made her choice to learn from and support those in poverty, she pursued it for the rest of her life.

Her goal: a common good, a social conscience, which would lead to support of better wages and working conditions and also see women as full human beings She wished for humanity to become civilized and saw regulation of greed and establishment of equality as ways to create civilization. Jane considered charity and mere benevolence as a type of arrogance. For this reason, she banned religious people with a goal of conversion from Hull House. Instead, she pushed for opportunities to change people’s lives. 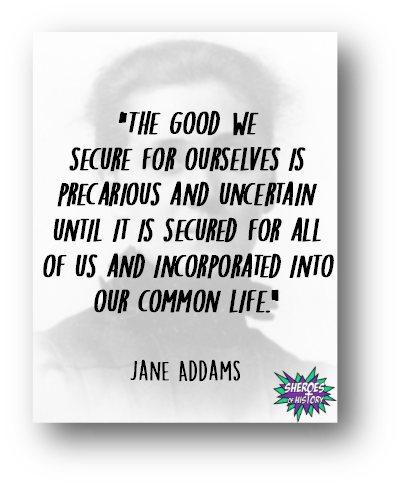 In addition to starting Hull House, Jane was an author of best selling books on peace and social change and an advocate of rights for women.  Seeing war as a burden on the poor, she became a pacifist. She successfully lobbied for child labor restrictions, workplace safety regulations, labor laws, and compulsory education. She was a champion of rights for women and immigrants. She is credited as being the first person to view social work as a career. She began numerous organizations devoted to peace and justice, including the American Civil Liberties Union and the Women’s International League for Peace and Freedom .Jane Addams was awarded the Nobel Peace Prize in 1931, four years prior to her death.

Jane considered herself a Platonist, in love with beauty and high ideals. Besides her father, Jane had two great human loves in her life. Ellen Gates Starr was a college friend and a co-founder of Hull House.  Following the break up of this relationship, Jane found love with Mary Rozet Smith, nine years her junior, and like Jane, wealthy with a calm nature and volunteering spirit. This relationship would last until their deaths—Mary in 1934 and Jane in 1935.  The LGBT Community has honored Addams as an icon and hero. Following her vision, community centers can be found across the globe.

Written for Sheroes of History by Catherine Haustein. Catherine is a scientist and the author of the novels Mixed In and Natural Attraction

Jane Addams: Spirit in Action by Louise W. Knight is a book about Jane’s life.

If you find yourself in Chicago why not visit the Hull House Museum and discover more about Jane’s life and work?