Born in San Rafael, California in 1887, Louise was the only daughter of mining magnate John Franklin Boyd and the well-bred Louise Cook Arner. As a young woman, she became a prominent socialite like her mother and was groomed to assume control of her father’s financial empire.  Upon the death of her parents, Louise Arner Boyd became a millionairess in her early thirties. Unmarried and with no living relatives, she was freed from the gilded cage that had constrained her for so long.

Defying societal expectations, she fulfilled a long cherished desire to sail to the Arctic. A 1926 pleasure cruise to Spitsbergen and Franz Josef Land high above the Arctic Circle proved to be a pivotal event. For the rest of her life, Louise was driven by an obsessive passion for the north.

In 1928, after months of meticulous research and planning, she organized her first expedition by ship to the Arctic. Upon arrival at the harbour in Tromsø, Norway shortly before the voyage was to begin, she learned that famed Norwegian polar explorer Roald Amundsen, who had been the first to conquer the South Pole in 1911, had gone missing. Louise put her ship at the disposal of the Norwegian government and, unexpectedly, became one of the leaders of a daring quest of international significance. Although Amundsen was never found, this hazardous mission whetted Louise’s appetite for adventure.

Returning to her California mansion and her busy life as a generous philanthropist and society leader, Louise lost no time initiating ambitious plans for her future. Between 1928 and 1955, she organized, financed and lead seven polar expeditions by sea to Greenland, Spitsbergen and Franz Josef Land. Supported by the American Geographical Society, she published three scholarly books about her adventures including The Fiord Region of East Greenland 1935) and The Coast of Northeast Greenland with Hydrographic Studies in the Greenland Sea (1948).

As her experience grew, so too did the scope of the work conducted on each successive voyage. She hired top-notch researchers from around the world to carry out field work resulting in scientific contributions in geology, oceanography, ecology, glaciology and geomorphology. Although her primary role was expedition leader, she was also the ship botanist and photographer. Her detailed photographs and data relating to Greenlandic glacier recession remain of keen interest to contemporary scientists studying climate change.

During World War II, she worked in military intelligence for the U.S. government and her expedition data proved invaluable to Allied forces. Her bravery and scientific contributions won international renown and she received honorary degrees and awards from Norway, France, Denmark, Poland and the United States. Louise dedicated her whole life to the cause of polar exploration. She poured her personal fortune into expeditions aimed at advancing modern science and satisfying her own profound curiosity about the north.

Despite the high regard in which she was held by other explorers, scientists and governments during her lifetime, Louise Arner Boyd paid a heavy price and her extraordinary life and legacy have largely been forgotten today. Socialite. Philanthropist. Geographer. Photographer. Scientist. Explorer. Her seven expeditions and the scientific data that was generated as a result should ensure that the stature of Louise Arner Boyd is elevated to that of other explorers of the twentieth century.

Written for Sheroes of History by Joanna Kafarowski PhD. Joanna has worked extensively with Indigenous women in the Arctic and participated in a Last Degree North Pole Expedition. Her new biography of Louise Arner Boyd entitled, The Polar Adventures of a Rich American Dame  A Life of Louise Arner Boyd will be published in November. It is available for pre-order here. 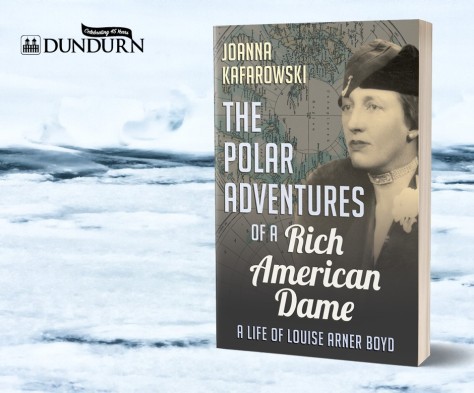 If this piece has piqued your interest, why not pre-order Joanna’s book? You can get it here (UK) or here (US)

Read this article on the National Archives website: Women of the Polar Archives  The Films and Stories of Marie Peary Stafford and Louise Boyd by Audrey Amidon , Prologue Magazine December 2010 Volume 42(2)

You can even see actual footage of Louise on one of her expeditions here: