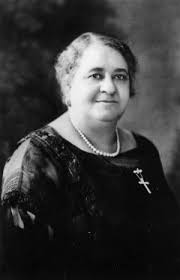 Maggie Lena Walker (1867-1934) spent her life dedicated to improving the status of African-Americans and women, particularly through economic empowerment. She was the first woman in America to found and serve as president of a bank. She was also a leader in her community, a great orator, a successful businesswoman and a philanthropist. This is a just a brief summation of Walker’s accomplishments – how she became all of these things, considering where she started in life, is a testament to her drive and determination and an accomplishment in itself.

Walker knew the struggles of black women first hand. Before she was born, her mother had been a slave and kitchen worker, then worked as a laundress when Walker was a child. It was an occupation that payed barely enough to live on, but in late 19th century Virginia, was one of the few options available for black women with families to care for.

Walker also experienced institutional discrimination at a young age when her high school graduation was to be segregated into separate ceremonies for white and black students. Walker organized a student strike in protest, and as a result the African-American students were allowed to have commencement at the school instead of a nearby church.

After graduating, Walker worked as a teacher while also working part time as an insurance agent, studying accounting at night, and continuing her volunteer activities with the Independent Order of St. Luke, an African-American fraternal organization that provided health care and burial services, which Walker had joined at age 14.

After her marriage in 1886, Walker quit working as was customary for women at the time. She then devoted her energies to her work with St. Luke, creating a juvenile branch of the Order and rising to its highest rank when elected Right Worthy Grand Secretary in 1899. By this time, the Order was in debt and in danger of failing. Walker went on a lecturing tour around the country to increase membership. A charismatic and passionate speaker, she moved audiences and raised membership and funds. Always looking for the next step needed to advance the Order and always with the interests of her community at heart, under Walker’s direction, the Order grew and prospered, adding insurance, printing and college loans to its services.

In 1902 Walker founded the Order’s newspaper, the St. Luke Herald to promote improved communication and awareness of the organization. In 1903 she chartered and became president of the St. Luke Penny Savings Bank. It was her firm belief that the money and talents of the African-American and women’s communities should be put to use for their own benefit:

“If our women want to avoid the traps and snares of life, they must band themselves together, organize, acknowledge leadership … and work and business for themselves.”

After becoming a wealthy and successful woman, Walker gave her support to African-American and women’s organizations, including the International Council of Women of the Darker Races, the National Association of Wage Earners, National Urban League and the Virginia Interracial Committee. She also helped found the Richmond Council of Colored Women and the Richmond branch of the NAACP.

When her resignation was called for by members of St. Luke after a family tragedy in 1915 caused negative publicity, Walker defended herself and her position with a speech so moving she received a standing ovation and kept her position with the Order. Walker remained as Grand Secretary until her death.

By the late 1920’s Walker’s health began to fail. Then, in the wake of the stock market collapse of October 1929, Walker’s Bank was merged with other black-owned banks in Richmond to become the Consolidated Bank and Trust Company in 1930. Despite her ill health, Walker served as chairman of the board. The Consolidated Bank and Trust Company was the oldest continuously operating black-owned bank in the United States until it was acquired in 2005 by Abigail Adams National Bancorp. Although it is now Premier Bank, The Consolidated Division, the bank is still in business today and retains Walker’s legacy.

Maggie Lena Walker passed away in 1934 from complications of diabetes. To learn more about her remarkable life, please see the additional reading below.

Written by Rielyn Lane. This is an edited version of an essay which was originally posted in March 2009 on the Independent Group Blog, which is now inactive.

Here are some sites Rielyn suggests for further information:

Uncovered boxes shed light on Maggie Lena Walker, an African American icon and first woman to own a U.S. bank

Pennies to Dollars: The Story of Maggie Lena Walker