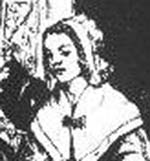 Margaret Fell (née Askew, later Fox) was born into a wealthy gentry Lancashire family in 1614. By the time of her death in 1702 she had gained an international reputation as a leading figure of Quakerism.

Known as the ‘Mother of Quakerism’, she played a crucial role as an organiser, innovator, author and elder of the early movement. Although the details of her life as a Quaker leader are well-known, her influence in the early movement was greater than traditional Quaker history has suggested and is a subject that is only just beginning to receive due acknowledgement by historians.