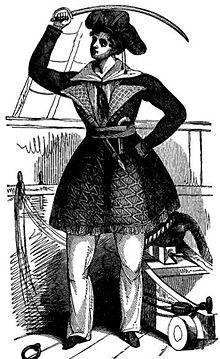 Yes you read that right, this week’s post is about a Shero who was not only a princess, but also a pirate and, just for good measure, an actual goth! If you don’t love Princess Alfhild (also known as Awilda or Alvilda) already, you soon will.

The story of this awesome pirate princess was recorded by a chap called Saxo Grammaticus in his 12th Century book, ‘Gesta Danorum’ (Deeds of the Danes).

Princess Alfhild was the daughter of Siward, King of the Goths, who lived during the 5th Century in what is now Sweden. In true princess style,  her parents kept her locked in her room guarded by two vicious snakes. Any potential suitors would have to first defeat her reptilian body guards.

While many men came and failed, eventually one cunning Danish prince named Alf managed to slay the vipers (supposedly by covering himself “with a blood-stained hide” to confuse them!) Many assumed, including Alf it would seem, that this meant he would swiftly be wed to the young princess Alfhild, however things didn’t pan out quite like that.

Demonstrating the type of progressive attitude for which the Swedes are well known, Alfhild’s dad declared that if she was to marry it would have to be her own “free & decided choice”, which, as it turned out, it very much wasn’t.

Aghast at the thought of marrying the bloodied snake-slayer Alf, she instead took flight, leaving the palace disguised as a man. The obvious thing to do of course was to gather a band of disgruntled women also keen to stay single, commandeer a ship and set sail for a life of piracy; so that’s what she did. Together Alfhild & her female crew learned to weild axes and swords, quickly establishing a fearsome reputation across the Scandinavian seas.

When they came across another ship, full of male pirates whose captain had just died, she managed to convince them all to follow her as their new captain!

Word had spread of this growing band of pirates and, unsettled by the havoc she was wreaking, the Danes sent their own ships to try and capture her. By this time Alfhild commanded a large fleet, when her old flame Alf led an expedition to hunt her down, he found himself outnumbered. However, displaying the same courage & wit as he had when defeating the snakes, he managed to put ship after ship out of action until he finally made it to the lead ship where Alfhild was waiting, sword in hand.

He didn’t know that it was Alfhild he was hunting at this point, the realisation only coming when, in the midst of a swashbuckling swordfight he knocked the helmet clean off her head and recognised the girl he had risked life & limb for all those years before!

According to Saxo, “Seeing the smoothness of her chin, [Alf] saw that he must fight with kisses and not with arms; that the cruel spears must be put away, and the enemy handled with gentler dealings”.

Perhaps she was impressed by his sword skills or his willingness to stand down, perhaps she just had a change of heart or realised how perfect their names would sound together, either way she decided that Alf wasn’t too bad after all and that she would take him as her husband. In true fairy tale style they lived happily ever after as Queen & King of Denmark.

Today some historians question how much of this story is fact & how much fiction, it certainly does seem a little too perfect. We must remember that like many stories handed down to us, it wasn’t until hundreds of years after the events happened that they were actually written down. However we do know that some of the characters from this tale were real, and it’s likely that even if this wasn’t exactly how things happened, there is probably at least a grain of the truth in the story. In my opinion, which ever way you look at it, it’s a story far too good not to be told!

If you like female pirates there are plenty more you can find out about. Have a look at this list and this list for many more swashbuckling sheroes! Also you can download our free factsheet about fellow girl-pirates Anne Bonny & Mary Read.

Alfhild and many other female pirates also feature in this book: She Captains: Heroines & Hellions of the Sea