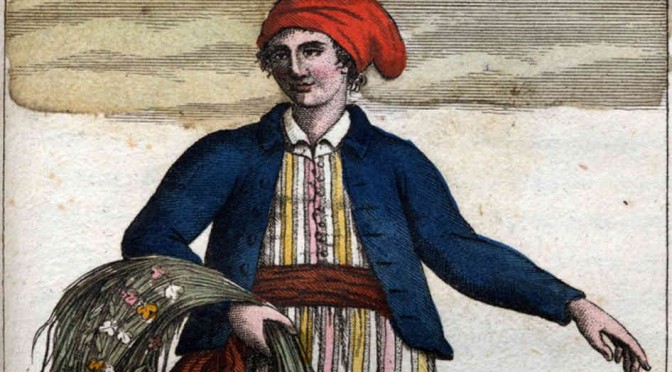 Jeanne Baret (or Barré or Baré) was the first woman to circumnavigate the world, but she was also a talented botanist with a passion for plants.

Jeanne Baret was born to a humble farming family in France in 1740. Not too much is known about her childhood, but at some point young Jeanne developed a keen interest in plants. As she grew older she learnt all she could about the healing properties of different plants and soon became a ‘herb woman’, treating people’s ailments with nature’s medicine.

While she was out collecting plants one day she met a kindred spirit, the botanist Philibert de Commerson. This was a meeting that would change her life forever.

Jeanne was employed by Commerson as a housekeeper. She lived with him and their relationship soon developed. Their passion for plants brought them together. While officially nothing more than his housekeeper at this time, it’s almost certain that their relationship went much deeper. In 1764 she became pregnant but refused to name the father on the certificate of pregnancy; it was most likely Commerson.

The French goverment was sending a crew on an expedition to sail around the world, captained by Louis Antoine de Bougainville. When commerson was invited to be the lead botanist on the expedition around the world to collect and catalogue new species of plants, how could he refuse? It was the opportunity of a lifetime. However he was in poor health and he worried how he would manage without Jeanne to assist him. The position came with the funds to employ a personal servant – the job would be perfect for Jeanne and would mean they could stay together, but unfortunately women were completely banned from the French Navy and all their ships. Jeanne would have to remain in France, unless…

A plan was hatched and before they knew it Jeanne had become Jean and had secured a position as Philibert’s servant and had boarded the storeship the Étoile. Due to the enormous amount of equipment that Commerson took on board with him, the Captain generously gave up his, much larger, cabin for him and his servant. This enabled Jeanne the privacy needed to maintain her disguise – particularly as the cabin had it’s own toilet!

For several months  into the expedition it would seem that everyone believed that Jeanne was Jean. She was integral to the work of Commerson, accompanying him to collect species of plants and sharing the cataloguing work. In fact, as his health deteriorated she did more and more of this work alone. When the ship got to to Brazil Jean (Jeanne) went inland while Commerson stayed aboard the ship, too unwell to join her. It was here she made one of the most famous discoveries of the whole expedition – a now famous blooming vine, which Commerson later named after the ship’s Captain; the Bougainvillea. Jean (Jeanne) became known for his (her) strength and courage – boldy searching over all types of terrain for undiscovered flora & fauna.

But rumours were starting to spread amongst the crew about the identity of Jean. The other sailors were suspicious that she never used the communal toilet they all did and never undressed in front of others.

Yesterday I checked on board the Étoile a rather peculiar event. For some time a rumour had been circulating on the two ships that Mr de Commerson’s servant, named Baré, was a woman.. His structure, his caution in never changing his clothes or carrying out any natural function in the presence of anyone, the sound of his voice, his beardless chin, and several other indications had given rise to this suspicion and reinforced it.

The truth finally came out that year, although just quite how is unsure as there are several different accounts.

One version says that upon setting foot on Tahiti a group of native islanders could tell that she was a woman and started pointing and shouting, giving the game away. Another account says that it was a Tahitian, Aotouru, who boarded the ship and commented towards Jean, calling her a Mahu,  a word which referred to someone who lived as a gender different to the sex they were assigned at birth. In their culture such people were respected and valued, but in making his remark he outed Jeanne’s true identity.

However it happened, the secret was out. When the ship reached Mauritius Commerson and Baret were left behind. They stayed as guests of another Frenchman and no doubt Bougainville was glad to be rid of his illegal crew member.

Jeanne and Philibert travelled together on further expeditions from Mauritius, collecting many more plants, shells and insects. Not many years later Commerson died on the island, leaving Jeanne stranded many, many miles from home.

She got a job in a small tavern and eventually married a French army officer, which enabled her to return home. Upon doing so she became the first woman to have circumnavigated the globe, although there was little fanfare. She took with her the plants she and Commerson had catalogued and gave them to the French government.

Commerson had left Jeanne a healthy sum in his will, which enabled her to buy a home to settle in. Just when she thought all her efforts had been forgotten she received notice from the Ministry of Marine that she would receive a pension of 200 livres a year. They wrote:

Jeanne Barré, by means of a disguise, circumnavigated the globe on one of the vessels commanded by Mr de Bougainville. She devoted herself in particular to assisting Mr de Commerson, doctor and botanist, and shared with great courage the labours and dangers of this savant. Her behaviour was exemplary and Mr de Bougainville refers to it with all due credit…. His Lordship has been gracious enough to grant to this extraordinary woman a pension of two hundred livres a year to be drawn from the fund for invalid servicemen and this pension shall be payable from 1 January 1785.

Though over 70 different plant species were named after Commerson, none acknowledged Baret. Commerson attempted to name one after her, but unfortunately it had already been discovered and named otherwise elsewhere. In 2015 Jeanne Baret finally got a small bit of long overdue recognition for her significant contribution to botany when a plant, the Solanum Baretiae was named after her.

Prince of Nassau-Siegen, a fellow of crew member on the expedition later wrote about Jeanne in his memoirs, saying,

I want to give her all the credit for her bravery, a far cry from the gentle pastimes afforded by her sex. She dared confront the stress, the dangers, and everything that happened that one could realistically expect on such a voyage. Her adventure should, I think, be included in a history of famous women.

I have to say I agree.

The definitive biography of Jeanne is The Dicovery of Jeanne Baret, by Glynis Ridley.

Here’s an awesome list of 15 female explorers you should know (including our lovely Jeanne).