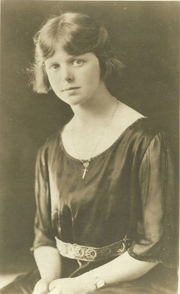 Dorothy Howell was an exceptional British musician, who composed over 130 pieces during her lifetime.

Dorothy was born in Handsworth, Birmingham in 1898. Her five siblings were all musical, and their father, an ironmaster by trade, was a self-taught pianist, who became the Musical Director at their local church.  Dorothy’s mother was also musical, an accomplished violinist & soprano. The family used to spend time singing and playing together.

By the age of 13 Dorothy was already composing pieces. She wrote a set of six pieces for piano that were inspired by the popular Tales of Beatrix Potter. Dorothy studied at a number of convent schools in Birmingham, Belgium & London, but at the age of just 15, with promising musical abilities, she enrolled at the Royal Academy of Music (RAM). There she was taught by great composers and pianists including Tobias Matthay and Sir J B McEwen.

In 1919 Dorothy got her big break. After her first piano recital was particularly well received,  a symphonic poem she had written called Lamia, inspired by the Keats poem of the same name, was chosen by Sir Joseph Henry Wood to be played at The Proms! It was performed to great acclaim, and after the initial performance, it was performed four more times. In subsequent years at The Proms Lamia was performed a total of nine times between 1919 and 1940.

This was the start of Dorothy’s success. The press heralded this young (she was only 21 at the time), British, female composer, writing rave reviews of Lamia.  Some of the headlines included “Girl Composer’s Success” and  “Girl Composer’s Triumph” . One newspaper even nicknamed her “The English Strauss”!

Subsequently several other pieces she had composed were performed in London and around the UK. In 1923 she premiered her Piano Concerto in D Minor and played the piano solo herself. The audience loved it. The following year she was invited to teach at The Royal Academy of Music as Professor of Harmony and Composition. This was a position she was to hold for the next 47 years, only retiring in 1970.

During the Second World War Dorothy joined the Women’s Land Army and became a member of the Council for the Encouragement of Music and the Arts (CEMA), giving performances around the country. A piece she had written was due to be performed in London at the Queen’s Hall in 1940, but it was bombed just before. The piece, Three Divertissements wasn’t performed until 1950.

As well as her career composing and teaching at RAM, she also taught around the UK, including in her home town at the Birmingham School of Music, and even produced her own training manuals. Her pupils describe her as a wonderful, warm, teacher. One recalled how:

“Her lessons – from obligatory tea and soggy biscuits ‘because you cannot learn without talking first’, over which she would tell be about her relationship with Henry Wood, always with an alarming twinkle in her eye!, right through to leaving the house some considerable time later, were an absolute joy. It is thirty years since my last piano lesson with her and I miss her still.”

In 1970 she retired from RAM, becoming a member of the Royal Philharmonic Society the following year. Despite ailing health she continued to write and teach privately. In the last years of her life she moved to Malvern where she tended to the grave of Edward Elgar, another great English composer. When she died in 1982 at the age or 83 she was buried near to him at St Wulstan’s church, Malvern.

After many years her name and music was mostly forgotten until in 2010 Lamia was revived once again in a performance at The Proms (read a review from The Birmingham Post here.) The same year the Library of Birmingham hosted an exhibition celebrating the life of this musical shero.

Although the Library of Birmingham exhibition was only temporary, they still have a fantastic resource on their website where you can explore Dorothy’s life and see a list of her works.

For an in depth study of Dorothy’s life and works, download this PDF of The Life and Times of Dorothy Howell by Vincent James Byrne.

There aren’t many recordings of Dorothy’s  music, but you can purchase this CD and listen to Lamia on the video below: