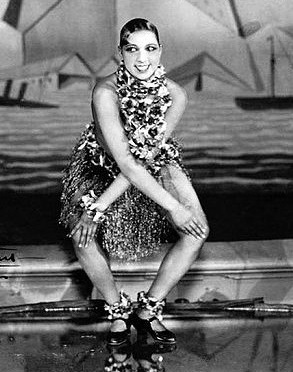 And yes a dancer too!

I’ve visited the Chateau des Milandes on the Dordogne River in France twice now. It is in a spectacular setting on a cliff side of the meandering Dordogne. It was the home of the cabaret dancer Josephine Baker, and the glamorous dresses and memorabilia from her career during the 20s and 30s in Paris attract many thousands of visitors. They are displayed on the lower floors of the Chateau. The beautiful chateau has numerous lavish bedrooms with splendid bathrooms that were installed after Josephine Baker lived there, and began to adopt orphans of many nationalities. But, like me, many of these tourists are unaware of her other achievements. They overshadow her dancing career and display her courage, bravery and moral integrity. The real story of Josephine Baker can be discovered on the top floor of the chateau.
Firstly though, you may well ask how a black woman came to be living in the heart of such beautiful countryside. Her life had begun in poverty. She was born in 1906 and adopted by former slaves from St Louis Missouri. Her parents had a song and dance act in Vaudeville theatre, and she was introduced to stage life at an early age. She rarely attended school, and spent a lot of time on the streets, and was already divorced by the age of 15. She joined a Vaudeville troop which went to New York where they had a smash hit on Broadway. The ‘blackface’ comedy act secured them a tour of Paris which was also an instant success. Josephine branched out on her own then as an ‘erotic’ dancer in Paris, did a tour of Europe, and appeared at the Folies Bergere, where one of her famous dance routines was with a banana skirt. She had singing lessons and started to sing as well as appearing in films. She was often called the ‘Black Pearl’, The Bronze Venus’ or ‘The Creole Goddess’. All names which describe her physical appearance of course, as that and her original dance routines mesmerised huge audiences and gave her large sums of money.

It must be remembered though that she was the first person of colour to become a movie star and a world class entertainer. She has been acknowledged as influential on later singers including Shirley Bassey, and more recently, Madonna and Lady Gaga.

When she returned to the States in 1936, the critics gave her a bad time and this confirmed for her that the colour bar was still alive and kicking. She married a French industrialist and became a French citizen. They bought the Chateau des Milandes where she later installed her mother and other family members to live. By this time World War 2 was imminent and that is where her clandestine career really took off and where she showed her true mettle. 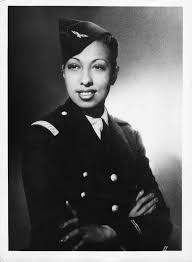 She was recruited by the French intelligence and at the many glamorous parties she attended was able to gather information about German and military mobilisation as well as troop movements, particularly from the Italian embassy. She entertained troops on the Maginot Line and then after the German invasion, she went to live in the Chateau which she and her second husband had bought by then and they hid many Free French, helping them to obtain visas. As an entertainer she was able to visit neutral countries, where she obtained information for the British about air fields, harbours etc. Much of the information was hidden within her sheet music and written in invisible ink. For her war work she was awarded the Croix de Geurre and was made a Chevalier Legion d‘honneur. On the top floor of the chateau these awards are displayed, as well as her uniform and other evidence of her war work.

There is also evidence of another secret which offers a further clue to her character. These are displayed in a side room near the bedrooms. She was a writer of children’s books and there are copies of her books on show, which she primarily wrote for her own children and show how caring she was as a mother. They are illustrated, lively and colourful.

After World War Two, she returned to the States, although refusing to perform to segregated audiences. She marched with Martin Luther King in the early 60s and addressed audiences on Civil Rights marches, a part of her speech is below:-
‘You know, friends, that I do not lie to you when I tell you I have walked into the palaces of kings and queens and into the houses of presidents.  And much more. But I could not walk into a hotel in America and get a cup of coffee, and that made me mad.

…I am not a young woman now, friends.  My life is behind me.  There is not too much fire burning inside me.  And before it goes out, I want you to use what is left to light that fire in you.  So that you can carry on, and so that you can do those things that I have done.  Then, when my fires have burned out, and I go where we all go someday, I can be happy.’

She was even asked by Coretta King to lead the Civil Rights Movement after her husband’s assassination, but Baker refused as she said she wanted to be a mother to her children. She’d adopted many orphans from various countries and they were called her ‘Rainbow Tribe.’

She ended her days in poverty and could no longer afford to live at the chateau despite one splendid final performance, she was persuaded to make in Paris. Her friend Princess Grace Kelly from Monaco rescued her and gave her and her children a home there. She died in 1975 and was given a wonderful funeral in Paris where all the streets were lined with her admirers, who recognised her bravery, humanity and courageous deeds. Her notoriety and skimpy dresses were overshadowed by her character and rightly so.

Below is her French army uniform and a photo with some of her adopted children. 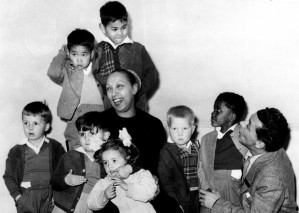 Written for Sheroes of History by Sue Crampton